Why Do We Wear Engagement Rings On The Left Hand?

Legend has it that there is a major vein, called the vena amoris (vein of love), that runs from the ring finger of the left hand directly to the heart.

Although not entirely biologically accurate, this ancient belief may have been in origin of why the third finger of the left hand became the ring finger where we traditionally wear engagement rings.
Ancients Romans used to give two rings at a betrothal-
an iron ring at to wear at home and a gold ring to be worn in public. 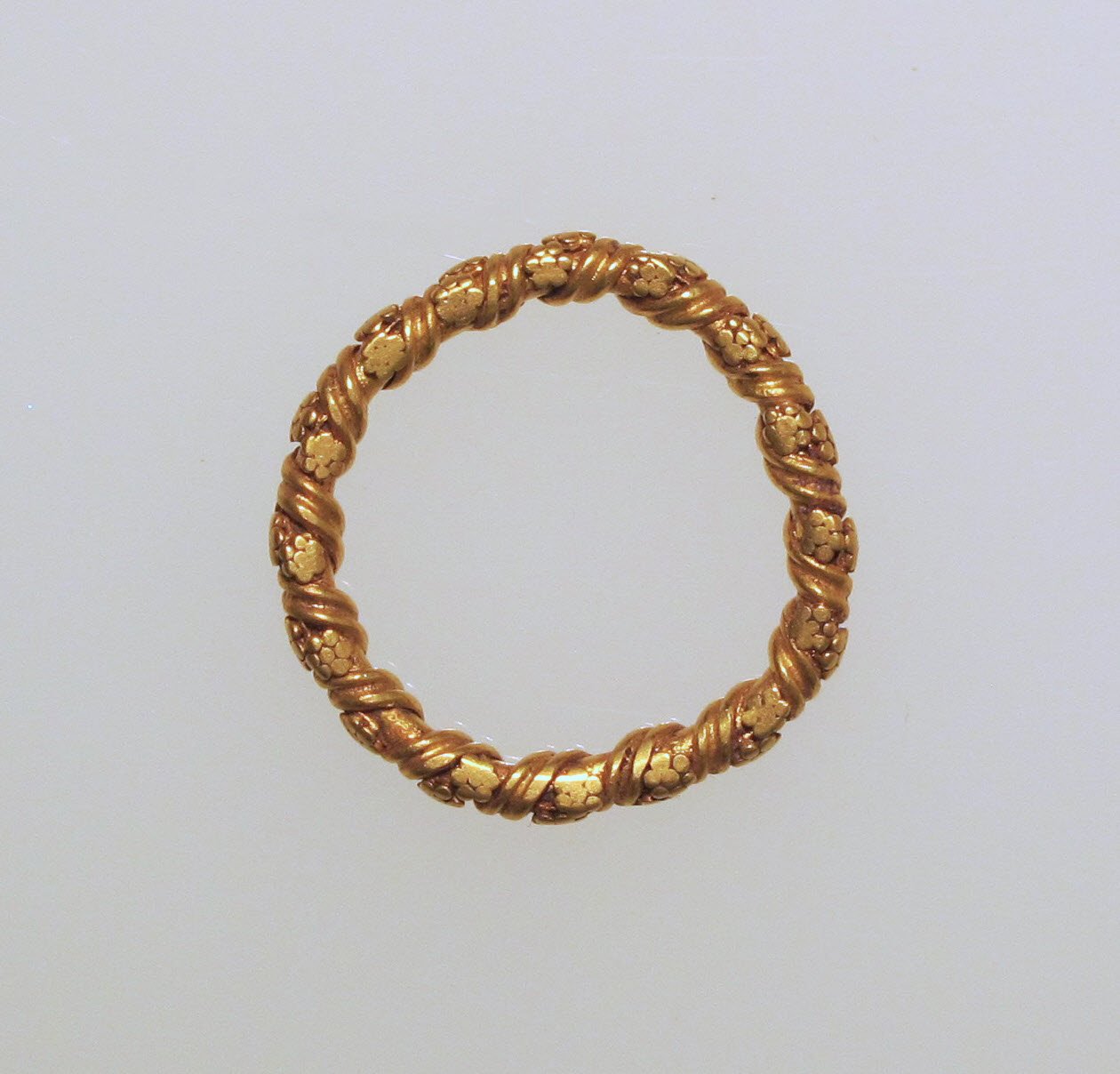 What Was The First Diamond Engagement Ring?

For centuries, the engagement ring tradition varied by region.
Sometimes rings were worn on the right hand, and sometimes the thumb.
The first notable case of a diamond engagement ring was in 1477
when Archduke Maximilian of Austria gave Mary of Burgundy a diamond ring to celebrate their betrothal.

This inspired a small fashion for giving diamond rings, but because diamonds were still very rare and diamond cutting was very difficult, this trend was contained to only to the upper echelons of society and nobility. 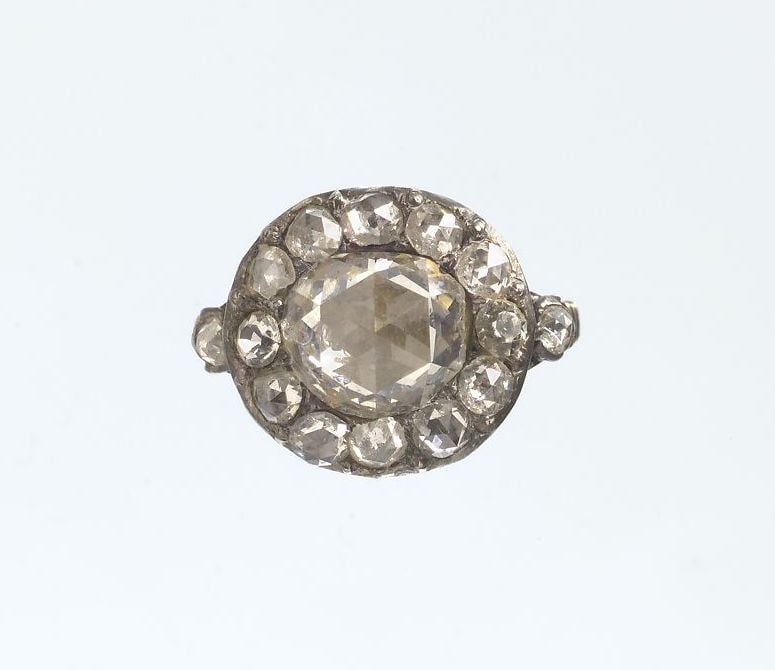 Diamond Ring ca. 1760, European origin
This ring was presented to Judith Crommelin (1739-1803) by Samuel Verplanck (1739-1820) at the time of their engagement in 1760. This ring has rose cut diamonds set in closed-back settings, which was typical during the eighteenth century.

What Is A Posy Ring?

There were other meaningful ring traditions popular from the 15th through the 17th centuries, like posy (also spelled posie, posey or poesy) rings.

These were usually given earlier in a relationship, and were symbols of affection and regard, but were not binding like an engagement ring. 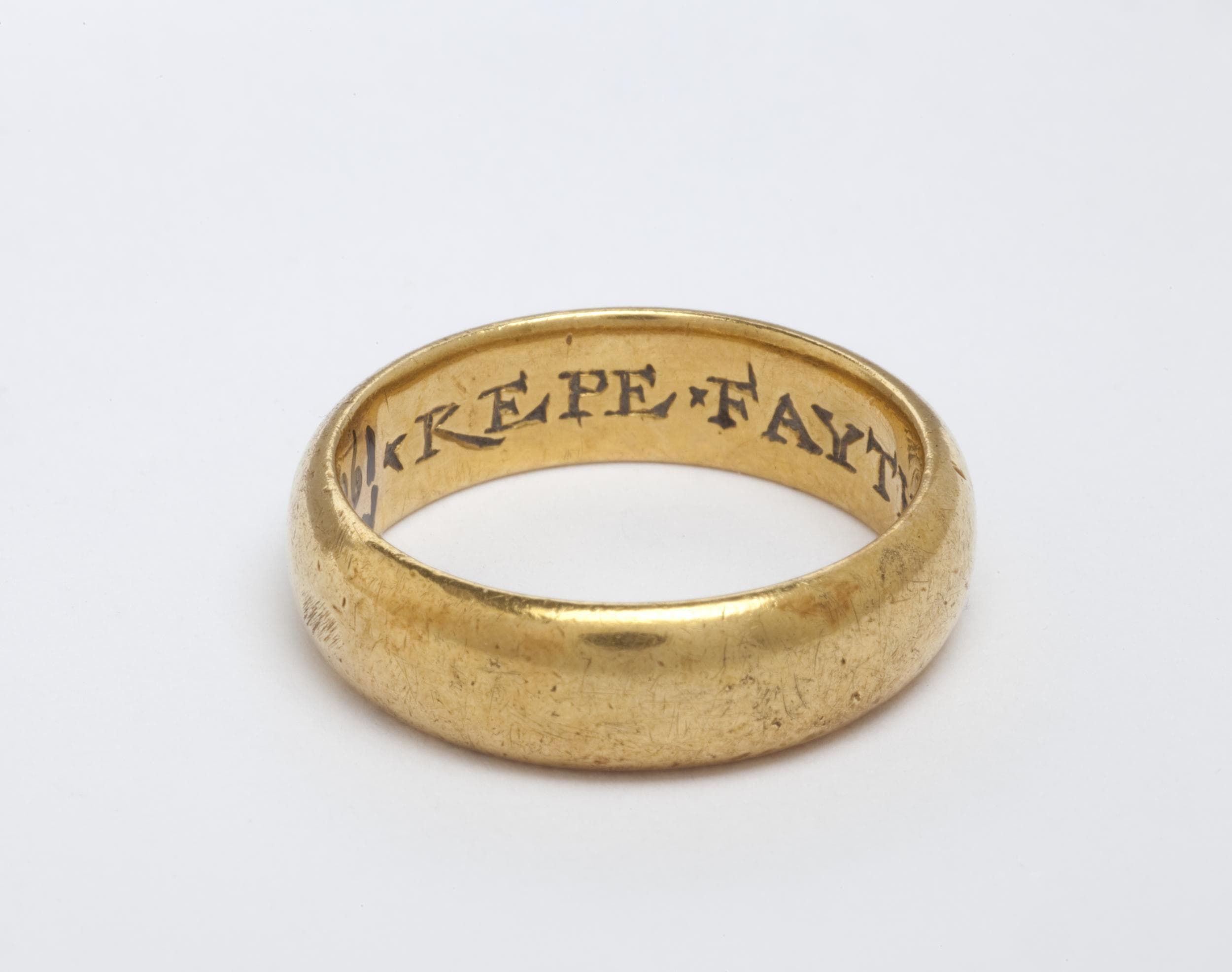 They often featured poetry, quotes, and phrases in Old English, French, or Latin, such as 'KEPE FAYTH TEIL DETHE'.

Another popular item was 'lover's eye' jewelry, where a miniature of your lover's eye was painted on a ring or in a locket. 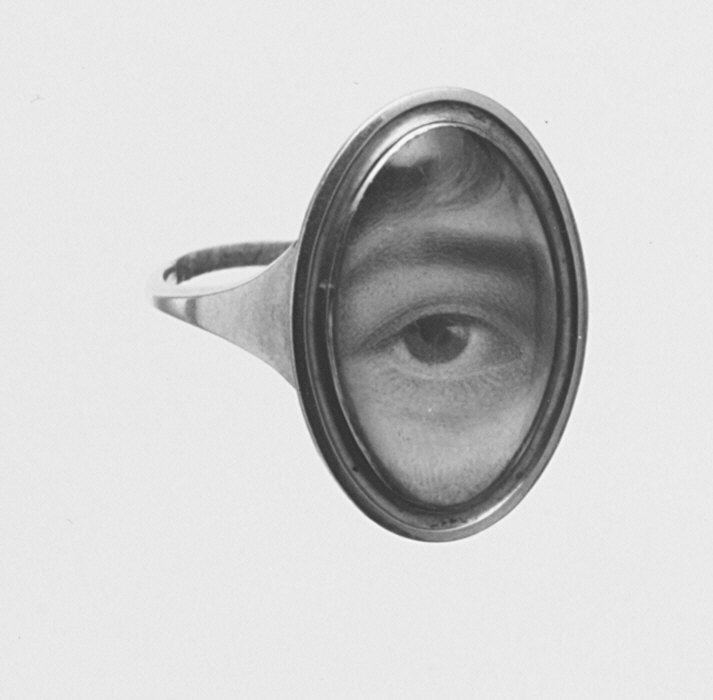 What Is A Tolkowsky Cut?

In the late Victorian era as more diamond mines were discovered and mining and diamond cutting technology improved, the amount of diamonds available increased significantly.

In 1919 the physicist Marcel Tolkowsky figured out the mathematical system to reflect the most light out of a diamond, whatever its shape.

The 'Tolkowsky cut,' as it is known, created the basis of all the incredibly radiant brilliant diamond cuts that we have today. 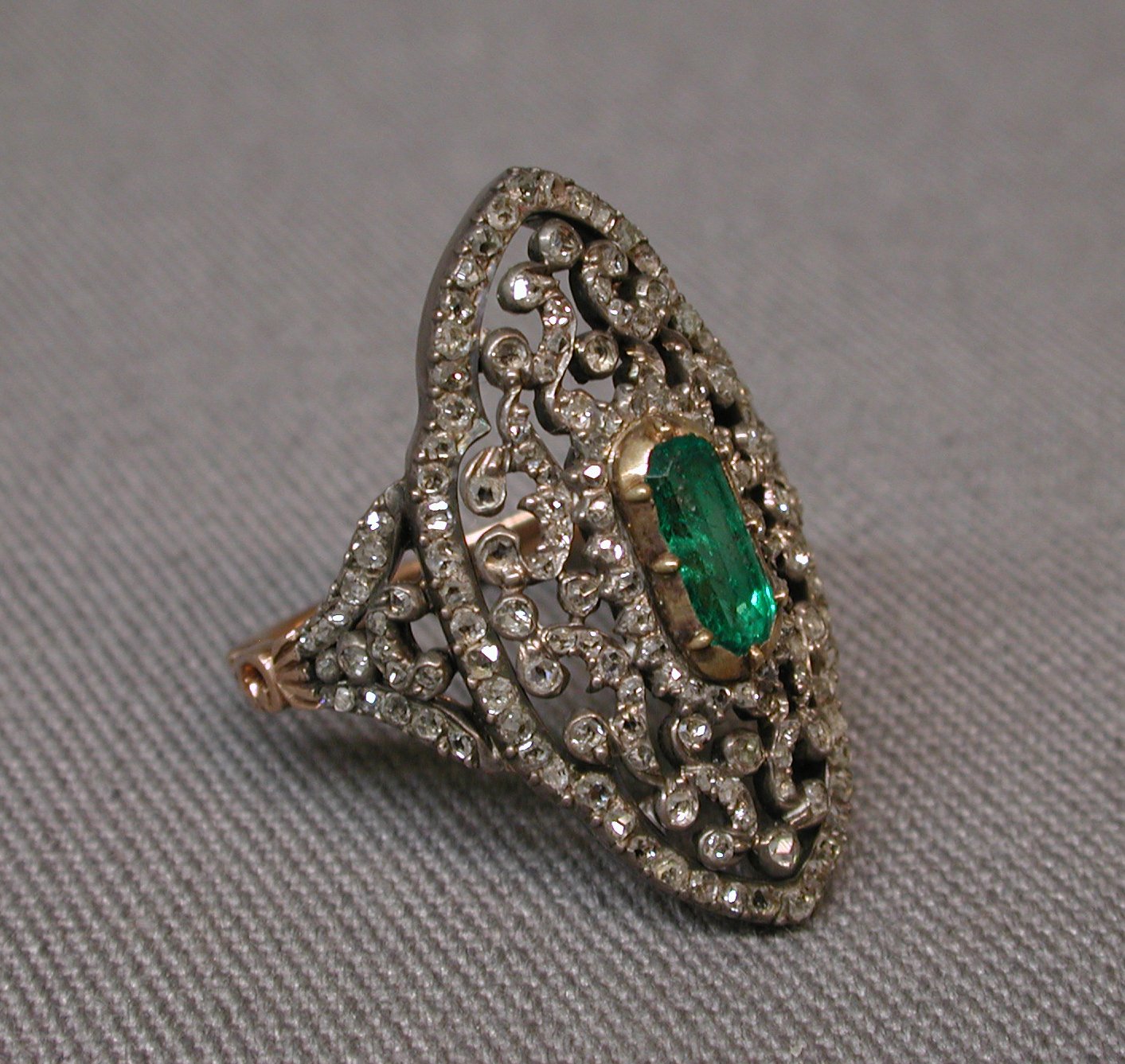 Why Do Engagement Rings Have Diamonds?

After the Great Depression reduced diamond sales in the 1930s,  De Beers starting promoting the tagline of “a diamond in forever” and the rest is history.
The diamond engagement ring became an iconic symbol from there on out.
During the postwar years, the diamond ring became the symbol of commitment, passion, and everlasting love. The classic diamond ring with the addition of the wedding band added during the ceremony became standard.

As decades have passed people have added or altered the tradition to suit their needs. A stack of bands, an additional ring at an anniversary, or a gemstone ring are all popular.

Ultimately your engagement ring needs to fit your style and your life in order to be something that you will want to wear everyday. 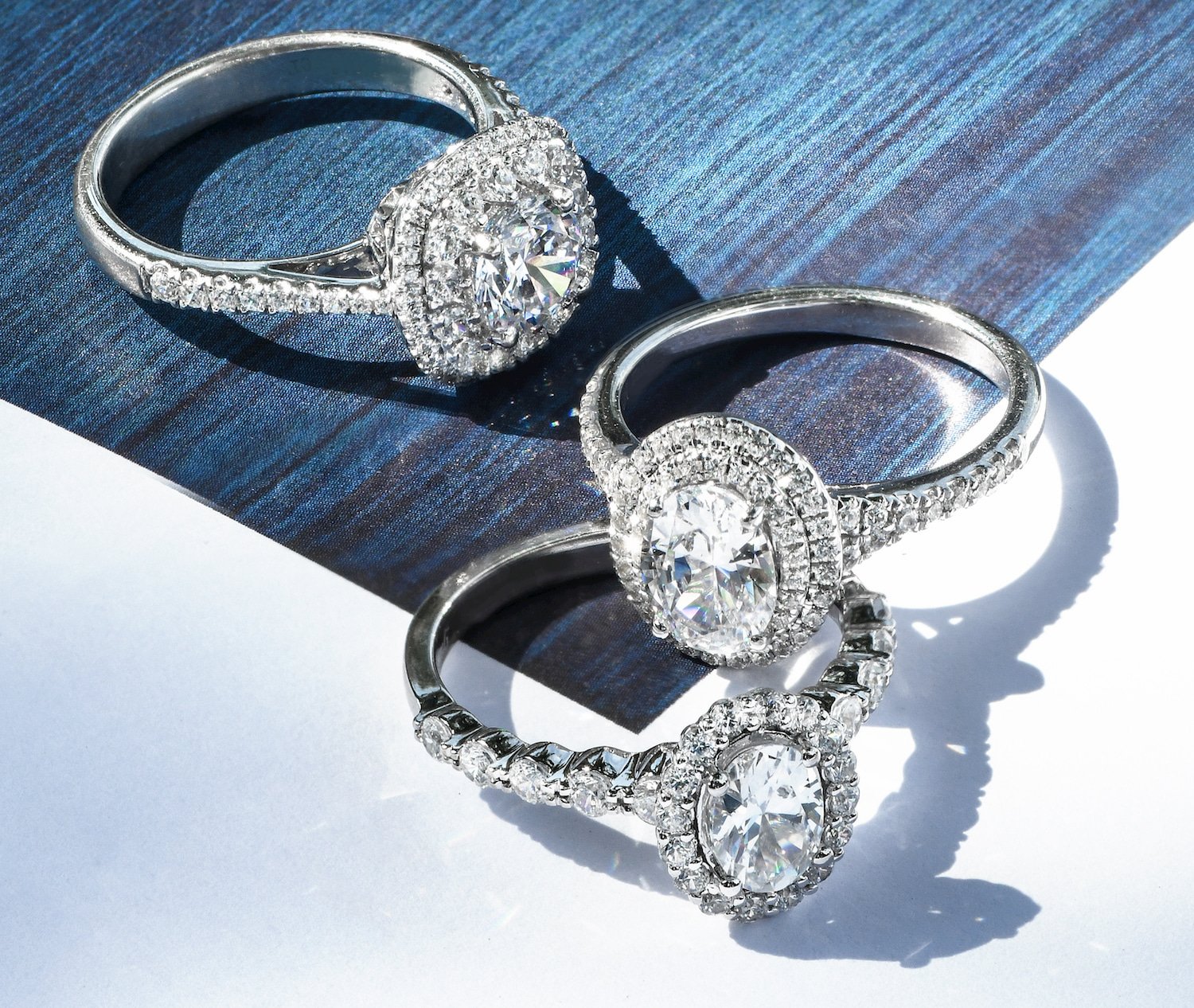